The Life & Thoughts Of Socrates

Today we will interact on “Thoughts of Socrates and its facts”.Socrates was one of the most respected philosopher in the 5th century B.C. He was not studying about culture fashion and other matters that are considered socially important. He was the most interesting and influential thinker,Whose message was effective conclusion to  transformed the entire enterprise. He learnt art of using language effectively & method of reasoning & reaching conclusions by considering theories & ideas of sophists, ideas of Ionian & the culture of Periclean Athens. He also knew the logical tricks developed for a new purpose. 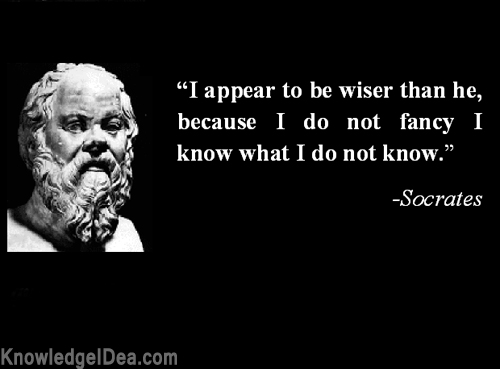 The achievement of truth , he had willingness to change everything in question, everything gave him idea about the critical philosophy.

Philosophy cover all fields such as knowledge, morality, thoughts, virtual, nature, immorality, relation between body & soul & about how people should live.

To know Socrates, We have to depend upon his students:

Socrates was a great public teacher & also well-known for his casual & informal talkative skills in his own time. He wrote nothing about his knowledge, unfortunately for getting information about his personality, We have depend upon his students, Plato & Kenophon were best students of Socrates. Plato had information about the last day of Socrates’s life. At the last day of his life, He claimed that philosophy was more important practice for obtaining used to death & dying. They had detailed information of his methods & results. But confusion is that, Plato was a philosopher , he injected his theories into dialogues.

Socrates was born in Athens , he was the son of Sophroniscus. He got his basic education in music literature & gymnastic. Socrates had trust on superiority of statement of convince people with opinion &  he spent great part of his life in Athens in the public & marketplace. Socrates had not good or attractive personality, short stature but he was good hardy and self-controlled person. He fully enjoyed his life, he devoted his life for the achievement of his valuable goals & also achieved social popularity.

Socrates had too much interest in politics, he controlled politics activities in the direction that he want , he had thoughts that by philosophy & teaching he could serve best service for his country. He involved in teaching activities due  to  this Socrates did not record his philosophy in form of books, articles or in any other form. His way of teaching was based on philosophy subject like self-knowledge, love, thinking of doing right, justice. He believed that no person have bad habits, this weakness come in a person in result of ignorance.

Socrates was a patriot & had deep belief on religion, at that time there were many people, who disliked Socrates attitude for the Athenian blamed that he was nevertheless committed a crime & establish new religion. He was charged because of introducing new god or goddess, ought the gods of Athens state, he was also charged due to misguided. The principle of democracy to the young people, he was in mistake to identified with Sophists. This might be possible because a comic poet Aristophanes made fun to his ideas or feelings in his play. The clouds as the master of a “thinking shop”.

Plato sorry gives the importance tot he main idea of the defense made by Socrates, it was the idea of his life , he was agreed to executed due to small majority of Athens’s people. He took court’s death sentences as a joke, a group of people who listen the facts about his crime was so angered with his death penalty because Socrates had great value as a best philosopher who had a mission to do something good for his country.

His friends wanted to escaped him from the punished of death, but he follow the law & die. Socrates mission “No one is wiser than you” his goals of life is to help people to get self-knowledge, he made public discussion of the main of life that knowledge & virtue is very important of the success of human life. “The unexamined life is not worth living”.