Most Influential Personality in the World

We call role model to those people from whom we admire and try to imitate. Hazrat Muhammad (SAW) is a complete code of life or influential Personality all over the world. He was born on April 20, 571. Name of Muhammad (SAW) means highly respected. 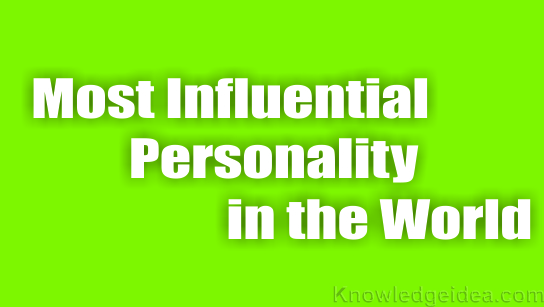 For the success of people, who are Muslim & non-Muslim in the world and day the of judgment, every situation, condition, even minutest information of his Muhammad (SAW) life recorded in Holy Quran. It is only holy book, Which words remain same . The saying of Sir William about the Quran. He says that,

There is probably in the world no other book, which has remained twelve centuries with so pure text

Life & works of Muhammad (SAW) are not difficult to understand. Prophet of Allah Hazrat Muhammad (SAW) teaches us self-control and stander of behavior to the position of praying even on the battle field.  He treat his enemies in noblest & kindness way even he stood in full power is a good example for his followers. Even he didn’t take any action against his bitterest enemies, Who killed his dearest uncle Hamza. He (SAW) only one person, Who taught as that the principles brotherhood and rights, responsibilities of human beings.

He (SAW) took great part in improvement of social conditions. Every religion define the same rules or principles of brotherhood but, He (SAW) had put this idea in genuine practice. Islam is only the religion, Which gather people, No one id bigger everyone is equal. Muhammad (SAW) finished the concept of colors, ranking, race among the human beings. A beautiful saying is that,

At the time of Hajj people from all over the world gather in Makkah or Madina as a member of one family. They all are in simple dress consist of two simple white piece of cloth, No one has great value everyone is equal at this event even the president or prime minister of any country is equal with common people.

All are repeating these words,

Here am I, O Allah, at the command,thou art one & alone, Here am I

Thus there is no difference in high middle or low-class. Hazrat Muhammad (SAW) brought the best system of in which people choose their rulers. There were many caliphs of Islam, Who were selected for to maintain the democracy in best form . The caliph Ali, Abbas, Mansur, Mamun  and many other caliphs were selected. He (SAW) also gave stress on the rights of women.

Women are the important part of society. Before Islam there was no respect for women. No one agree to give their rights. They thought that, Women are the curse of Allah. Islam remove the roots of this rude concept. It is too much difficult to find a person who is true, mankind and honest in every dealing. But there is Muhammad (SAW) prophet of Allah, He (SAW) is the common man. He (SAW) is the honest business man. He (SAW) helper of poor, orphans, protector of weak person. He (SAW) is a person who is in favor of women, He (SAW) is a law-maker judge in all activities of life in all departments. He is also like a hero. He is an ideal personality.

No one in the world can be compared with Prophet (SAW). He (SAW) is one & only personality, Which deal every matter of life. If we follow his rules, We can get success.