In this article, we will interact on “Democracy versus Dictatorship”.When you choose or select candidate by voting right for to run country system. These people are from different political parties, which we select by voting for them in election. These people might be from those parties, which you dislike. In dictatorship only one political part governed rules & regulations in dictatorship very strict person from army or by forced rules in a country. 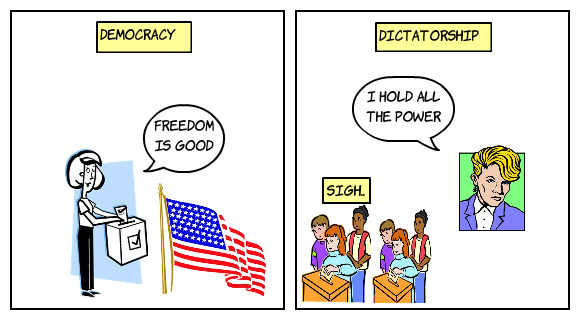 Many people are in favor of democracy & some feel that dictatorship is best. In dictatorship system decision are made quickly. Benefits provide from both economy & military people can’t decide things for themselves, people with power have rights to control other people’s actions. In democracy system people from different parties ruled in different areas for which they are selected by votes. People have also right to make decision or to contribute in political system.

Nations that have democratic system face lot of face, or behavior. Which is intended to hurt, restrictions or limitation faced by army on the other hand nations. Who have democracy system enjoy freedom, high standards of living & other facilities.

When political, economic & social system of a country is upset or out of control them dictatorship occur. Many countries face dictatorship system, In Pakistan, due to instability of political system many dictator ruled many times. In this system decision are made quickly & efficiently because it is not multiparty system. Few numbers of people involved in decision-making. The leader or controller from the army , Who governed a country decides new polices, makes new laws. This system helps people to overcome their confusion about economy instability in past. Organized plans for the benefits of their country , used the methods to motivate people to meet or achieved goals.A strong & capable dictator encourage military other countries have fear of attacking.

In dictatorship only one party control all political & economic system also control social life. This system improve literacy rate. every sector rapidly developed. In dictatorship people have no rights to elect the leader to their choice, also have not freedom to develop their own views or make implement in their ideas,  no one can go against dictatorial system. Living standards of people influenced by dictator. They can’t live freely, Mostly laws made in dictator against the public’s desires.

Glorification of a leader in a dictatorship is a method to make confirm that people of a country are faithful & agree that government in power. Some people are in favor of dictatorial system. They think that, this system is more efficient & beneficial for country’s economy, political & social system. This system loses the enthusiasm of other countries from attacking & also make citizen of country afraid from rebelling. Dictatorship system sometime very successful in many countries.

In democratic system people freely decide, Which people are best for them. People have right to spoken that what is going to against them. In democracy system government allow people to help in making decisions . Democracy is come from rules of logic, laws & rules are made in democracy system according to public opinion.

Political rights, political equality, right to elect leader. This facilities & opinions give to the public in democratic system. People have freedom to develop their own views and ideas. All political parties make decisions & new polices for the betterment of economy. This system also encourages people to work hard for the benefits of the country.

Democracy is a device that ensure we shall be governed no better than we deserve.George Bernard

Democracy is better than dictatorship because freedom of nation is ultimate important for the success of nation, Low living standards is result of dictatorship. Friedrich W.Nietzsche saying about freedom is,

People demand freedom only when they have no power.Friedrich W.Nietzsche

It is a good essay. Which helped me a lot. Thank you sir for publishing such a great essay.