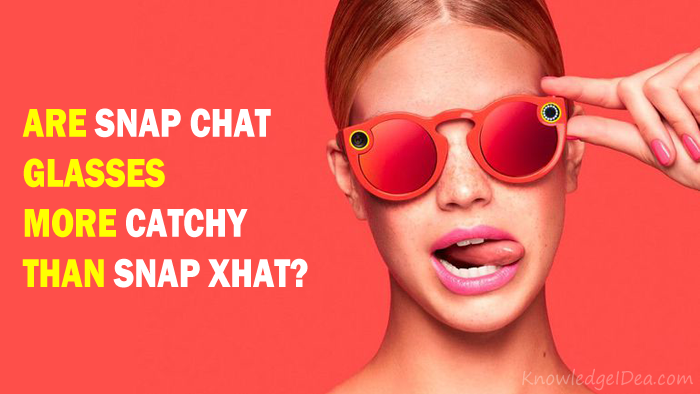 Young CEO of snap chat, Evan Spiegel, has stated that he has tested first prototype of Snap Chat Spectacles as he was on vacation with his fiancé. When the pair when through woods wearing these Spectacles and they saw the video when they had returned. This video made by Snap chat spectacles made them feel that time had returned. Snap chat’s this idea reflects an idea that company is indulging into the world of gadgets and toys. Also renaming company shows that snap chat is going into another direction instead of being a social networking app which is yet to be exposed.

It is being said that snap chat spectacles are going to be launched in coming fall. Anyway, company has revealed about its spectacles in official announcements.  Snap chat is going to change the concept of traditional glasses with its attractive spectacles. Snap chat spectacles would be like attractive colorful, designed sun glasses having camera connected with them. These spectacles could record video up to 30 seconds. These spectacles would have a Bluetooth connection with any smart phone (android or iPhone). Connected smart phone must have snap chat installed and logged in to work. This recorded video will directly be uploaded to snap chat.

Snap chat spectacles are expected to be colorful and attractive.  Glasses have camera with prominent circular ring. Spectacles don’t have any video display instead it would have connection with a smart phone. Evan Spiegel, CEO of snap chat, called them ‘toy’ and not much expensive, as in rage of $130. Many glasses in same rage are already available on amazon or similar sites.

As spectacles are wearable glasses so taking selfie is also not possible while wearing them. As snap chat app is more selfie trend oriented so it seems not for those people also. Snap chat CEO refers spectacles as ‘toy’ to be kept in pockets and worn any time.

As spectacles would have circular camera and record video in circular way. They would also have no display instead connection with smart phone and snap chat in it. Video recorded by Spectacles will directly be posted to snap chat. It would present same view as an eye. The 115 degree camera capture angle would provide video which have same portrait and landscape visual. As it going to record just 10 seconds video so it is not replaceable of other camera glasses to record a whole event or at least some minutes.

Many companies have already experimented with kind of idea as snap chat spectacles.  Camera wearable glasses had been manufactured by company named “Pivothead” and Google did this through Google glasses. It was exciting experience for people to have camera on their face and record what their eye were watching.

Spectacles being launched as sun glasses would also put wrong impression. As if spectacles can only be used under sun light, then what if it to post video under shade. Wearing sun glasses to post video on snap chat would not look good or seems not to survive as a trend. As it is head that snap chat is going to change its name so the Spectacles may be significance of its new change.

As snap chat spectacles have embedded camera and snap chat more selfie oriented app so it is not much going to be following the snap chat theme. Along with having no hidden camera and other functionality except recording 10 second video, these spectacles are just like some other sun glasses. As for spectacles to depend on a smart phone connection via Bluetooth to function also put negative impression.

Instead of providing a smart glasses, it seems a dumb idea to launch glasses which could mere record mere a few seconds and having visible camera as Snap chat spectacles. Due to these features, snap chat smart glasses seems not to become trendy as company is excited to do. As Google spent got it glasses into the hands of developers around the world, at cost of $1500 each but still this product never came close to consumer’s product. Also wearing sun glasses inside a room for uploading a video on snap chat would not be trendy.

As when Google glasses were launched they became mere source of laughter but it is yet to see what becomes of the Snap chat Spectacles. Despite of having competitors in the market and having no much distinguishing feature, it is to be looked forward that how Spectacles start a new trend.